END_OF_DOCUMENT_TOKEN_TO_BE_REPLACED

I’ve been rereading the book “The Origins of the Civil Rights Movement” by Aldon D. Morris.  I had it sitting on my shelf since I bought it, and skimmed it some previously. But the other day I started reading it again and realized it was far more valuable than I’d previously thought. It’s not just a book on the history of the Civil Rights Movement. It’s also a manual on how to create and sustain a successful movement. The author is a good place to go if you want to learn how to create and sustain a movement.

END_OF_DOCUMENT_TOKEN_TO_BE_REPLACED

The World Trade Organization whispered a complaint from Canada and Mexico about USA “Country of Origin” labeling laws — and congress repealed them. , so now our Monopolistic (as in playing the game of monopoly) Integrated vertically and horizontally Conglomerate Food companies No longer have to tell us where they came from. Isn’t that nice?

And it gets better, now some of the major producers have announced an initiative to export live chickens, slaughter them abroad and then reimport them to the United States. (See [Scaling up “The Jungle”] for more) The Jungle has gone International! Upton Sinclair would be thrashing around in his grave. 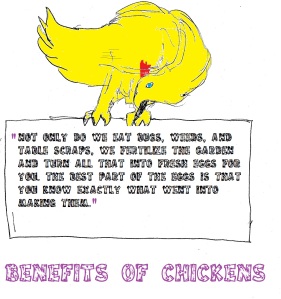 All the more reason for us to buy local products.

Since we don’t have a local Grocery store, fellow Brunswickians, we do still have options. One is to pick up quality, locally raised Chicken at the weekly City Farmer’s Market. The other is the “Chicken Revolution”. We can encourage more people to raise chickens locally. And we can make sure that if you can’t get to the nearest Wall-Mart or distant Grocery Stores for Fresh from China Chicken, we can make sure that either you can raise your own eggs and chickens, or buy them locally. That’s the “Chicken Revolution”. It’s not a left or right thing, it’s an eating thing. The nice thing is that the Chicken Revolution truly promises “A Chicken in Every Pot”. (Not yet a Pot for every chicken.)

More on the Chicken Revolution, From Frederick Newspaper Interview:

The benefits are innumerable. Not only do they eat bugs, weeds, and table scraps, they fertilize the garden and turn all that into fresh eggs for us. The best part of the eggs is that we know exactly what went into making them. They are also quite therapeutic. We enjoy sitting up on our deck and watching them scratch and cluck while we throw them down bread crumbs. This amounts to us watching ‘chicken TV’ as we call it … which can be very entertaining and relaxing.They also tend to eat right from your hand and follow you around the yard while you work….

To read about Upton Sinclair, go to http://www.online-literature.com/upton_sinclair/jungle/

I am not happy with the Governments current method of operating the Drone Program. I understand the laws the administration is operating under and the “national security” rationale for much of it. But I don’t buy all the “national security” arguments because there is a perfectly lawful way to go about prosecuting foreign wars that is both transparent and far more effective than the secret system being used now. The current system is still operating under some of the same 1% solution prescriptions that Cheney articulated after 911. Under that system it is important not to reveal “sources and methods” and to keep operational security until a target is destroyed. The 1% solution was Cheney’s idea that if one had to kill, torture or harm 100 non-combatant civilians to get to one bad guy, it was worth it. The current policy also represents the same attitude even if we have formally repudiated the 1% policy. “Mistakes will happen. If a civilian is in the way that is collateral damage.” The roots of the current system go back to World War I. But that doesn’t make them right. We are still using arguments that were used to justify the rendition and torture programs. For example the administration justified killing Awlaki on the basis:

“Just as the AUMF authorizes the military detention of a US citizen captured abroad who is part of an armed force within the scope of the AUMF, it also authorizes the use of ‘necessary and appropriate’ lethal force against a US citizen who has joined such an armed force,” reads the memo, written by former Justice Department lawyer David Barron, who also analyzed and rejected arguments that killing Awlaki would be tantamount to murder.” Guardian Article

This may be true. But there is a better process than the use of secret committees and processes for dealing with violent or criminal behavior than that. It is called “Rule of Law.” Essentially when someone leaves the country and joins an insurgency:

If we had done that on Awlaki then it would have been relatively easy to justify hitting him with a drone strike later. Heck some greedy Yemeni might have done it for us.

There isn’t that much difference between the two approaches, except that if Awlaki were charged with something he’d have the opportunity to report in and turn himself in for a fair trial and get his day in court. As it was the government has the legal authority to kill or detain traitors who take up arms against this country under older laws than the AUMF, but that doesn’t mean they should do it that way. Essentially Awlaki was an outlaw the day he took up arms against us.

Use of Force Guidelines

I’m writing because I had an argument with a Con who was essentially telling me that Obama was a tyrant because he authorized the drone strike against Awlaki. The guy made a whole lot of straw arguments. And I got angry at him partly because he kept repeating them after I told him how and why they were straw arguments. But I also was angry because I’m not comfortable with secret wars and the use of secret evidence to justify military action where there is no declaration of war. Rule of law also demands that we not engage in security state practices at home or abroad. It is not good for the long term survival of our democracy. The Right Wing is unhinged about this largely because the man with the decision power is Obama. They should be working with us to change the policies.

If you think that the new Governor Larry Hogan is a liberal reform Republican like the ones we knew when we were younger (or his father) and that we can make common cause with him to make the State Better, you’d better recall what it was like to work with John Erlich a few years ago. The Cons are not the Republicans of our grandparents generation and they aren’t even the Cons of our parents Generations and the Reagan years. Over the years their sourpuss base has pushed them ever more into libertarian and wingnut land to the point where anyone who thinks that this will be a “get along to go along” “business as usual” change is deluding him or herself.

I’m not saying we can’t make it look that way. If we setup the battlefield right, they, being politicians will tack to the center and work with us. But their issues, are not really “reform” as most reasonable people understand it. What is driving the current GOP is Social Dominance on the part of their leaders [See Are you a Social Dominance], and a kind of ennabling syndrome for Authoritarianism and Conventionality known as “Right Wing Authoritarian Behavior” [See Understanding Social Dominance Theory]. Both are dominated by dominant individuals who serve wealth and power first and think of minorities, the ill, the aged and women as people who should be dominated; as “losers.” Heaven forgive them, but RWA types are submissive to authority and aggressive to those they think are below their rank in social hierarchy.

So this blog is going to be primarily devoted to Maryland Politics in general and Local politics specifically. And I have a lot to say, and so will be saying it in a variety of ways.

Some of my friends and I are coming up with a plan to address Brunswick’s position as a place where there is a critical shortage of quality local food. In a few months the Farmers Market will reopen here. But in the meantime most folks here have trouble getting fresh vegetables. The plan is to work with other stakeholders to develop a capability of delivering food locally.  For example we could provide a pickup service to commuters so that when they return from travel on the Passenger Train we could have their groceries waiting.

I moved to Brunswick, Maryland last January. Since I’ve arrived I’ve learned a lot about my new home. Brunswick is located along the C & O Canal towpath, which is a national resource, near where it intersects with the Appalachian trail. It is a lovely little town with a lot of history, homes that are priced to sell, and poised for a comeback to the kind of art time.